Wells are steeped in history. There are loads of things we still do not understand about them, the more we learn the more questions we have.

There are 3 types of wells.

A spring is an aquifer which breaches the surface and water runs freely. We are able to capture the water and enable good use of it. There are many houses which depend on springs for all their water usage.

A hand dug well is in the name. It was hand dug by well diggers. Many would see a well digger as poor but it was a fairly high paid job. Certainly not bank manager money but it kept food on the table and a roof over the heads of their family. It was a very dangerous job and the death ratio was every 2 in 5. Without well diggers people had no water so they were always busy and in demand.

A natural dug well is a well which the water has naturally eroded the well towards the surface. They would find this by either a spring at the surface or using dowsing rods. Well diggers would then dig down and find it and brick line the first few meters which they had dug. The rest of the well would not be lined and would be the natural geology lining. These are usually very deep and can be as deep as 60 meters plus.

There were good well diggers and there were bad well diggers. Pretty much as with every trade. We have seen some excellent wells with extremely good brick structures and straight. We have also seen some that are completely crocked, do not go down straight and are very unstable and require us to repair them.

There were also people known as well scrubbers. They would come in every 5-10 years after the well had been dug and every 10 years after that to clean/scrub the well to ensure it was safe to drink and also still in perfect working order. Well scrubbers were usually children, I guess they were given a choice, either up the chimney or down the well. During the wars it was found many women became well cleaners because most of the men who had either dug or specialised in wells were not around and had gone to war. After the First World War well diggers were just not as experienced and the quality of them dropped dramatically. Then after World War 2 mains water was becoming very common and the job died out leaving no to very little history about this fascinating job which if you look at any well today is a work of art which lays forgotten. When you think most wells are over 200 years old it just shows how good they were at building them.

One of the more unusual UK sites with a claim to international fame is the Woodingdean Well. It was started in 1858 by Brighton's Guardians more as a cost cutting exercise, than as an attempt to break a world record, but it did break a record and still remains as the deepest "HAND DUG" well in the world.

Plans for a new workhouse
Back in 1858, plans were in hand to build a new workhouse at the top of what is now Elm Grove and to add to it an industrial school for juveniles some 2 miles away at Warren Farm. The aim of the school would be to teach the misplaced youth of the town "the habits of industry" and relieve them from "the bane of pauperism."

The expense of pumped water
However, the expense of having pumped water supplied from the local waterworks, then on the corner of Lewes Road (now Saunders Park) was considered prohibitive, so the Guardians decided that they would construct a single well for both properties and augment the workforce with labour from the Dyke Road Workhouse. In their opinion, making relief for the more able pauper, young or old and regardless of gender, conditional on some of the destitute undertaking an aspect of the well's construction would reduce labour costs and indirectly add a further deterrent to anyone considering applying to the workhouse for poor relief.

The initial plans were not successful
initial plan was to sink a 6 ft wide, brick lined shaft down some 400 feet to the subterranean water table. All the soil dug out would be placed in buckets and hand winched to a platform at the top of the shaft where it could be disposed of. After 2 years of digging, the shaft had only reached a depth of some 438 feet, but no water had been found. Fearing that they had just missed the supply, the contractor gave instructions for a lateral chamber to be driven some 30 ft northwards, but this too yeilded nothing. Further lateral tunnels were driven westwards and eastwards, but none of them were successful. Failing to acknowledge defeat, the Guardians sanctioned the construction of a further 4 ft wide shaft at the end of the eastern tunnel.

Digging done for 24 hours a day 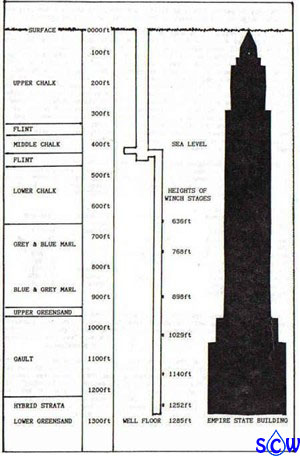 Work continued for several more years with men working 24 hours a day just by candle light in appalling conditions. Many removed their clothes and worked naked for within the confines of a 4 ft circle teams of men had to dig, load buckets and lay bricks. Winchmen stood on tiny platforms cut into the side of the shaft, passing spoil up and bricks down as the shaft continued forever downwards. One winchman actually plunged to his death.

Escalating costs caused concern
Above ground the Guardians began to bicker about the expense, for the Woodingdean Well was now costing the local ratepayer some £90 a week and jests about it were frequent. Some said the town was constructing an alternative route to the Antipodes, whereas others described the whole thing as "a great bore"!

The final break through
At the change of the evening shifts on Sunday 16th March 1862, the bricklayer noticed that the thin crust of earth he was standing on was being slowly pushed upwards like a giant piston. Scrambling up the numerous ladders to each winchman's platform, he and the others quickly vacated the shaft. It must have been a difficult task for the well had now been sunk to such an amazing depth their successful exit took some 45 minutes. Suddenly with a roar, the piston head crumbled and tools, buckets and ladders flooded up the shaft. Water had at last been found. It had taken over 4 years backbreaking work for a labour force which included many Brighton paupers, to hand dig a shaft some 1285 feet deep (850 of which were below sea level) without the aid of machines.

An incredible achievement
To put this incredible achievement, distance and the danger into perspective, I can think of no greater analogy than that used in P Mercer & D Holland's "Hunns Mere Pit" which I have interpreted using my own illustration. The Woodingdean Well's depth into the earth was greater than the height of the Empire State Building. Imagine climbing that building in darkness on a twice daily basis, using just a series of rickety ladders, let alone in a panic situation with water flooding up beneath you and your colleagues!

*For the original page please see our links page. A speacial Thanks to Roy Grant*